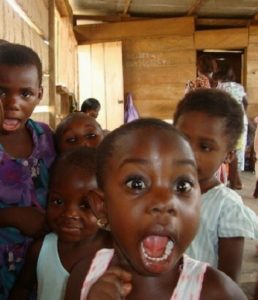 In Mozambique, 5 out of 10 children under the age of 5 is suffering from chronic malnutrition, a 20% from severe malnutrition.

There is a way to give them a better and decent life.

With the sponsoship, 27 euros per month are enough for a child to enter in the Kindergarten and have a full meal

The word for Kindergarten in Mozambique is Escolinhas and it receveis children from the age of 3 to 6, one-third ophans. This structure aims at being a support for disadvantaged children, by facilitating access to primary school. For this project CEFA collaborates with CAM (Consortium of Associations of Mozambique) in the Caia District.

Many activities are organised during the day: three hours of social activities, playtime, approach to Portuguese; pratice of simple hygiene rules, as well as a little snack.
The Escolinha has a control function by monitoring the state of health of the poorest children.

The educational system is characterised by a high school dropout and illiteracy rate, due to not suitable scholar structures and to a low level of instruction that exclude the most vulnarable groups of the population.

Communication to the supporter

If you decide to sponsor a child, you receive information about the child associated to you, and his photo. Twice a year supporters receive reports on the development of the activities from the volunteers on the ground.

The Republic of Mozambique is a country in East Africa and it is among the last 10 countries on the Human Development Index (HDI). After the indipendence from Portugal, in 1975, the country had a long period of civil war in which two factions has involved and this hit especially the basic facilities such as hospitals, schools and streets. The peace agreements were signed in 1992, but Mozambique even today has to face many critical issues, especially in rural areas, as Caia district where the kindergartens are located.
The population in the district is pretty young (about 45% of the population is under the age of 15) with a high rate of child mortality and a low life expectancy. The 80% of the population is illiterate and this problem is widespread especially among women. Only a few people speak Portuguese, which is the official language of Mozambique.

From the healthcare point of view, a hospital is in Caia and small clinics are on the outskirts of the district. However it is necessary to deal with the low health cover, the shortage of staff and his lack of preparation, the poor quantity of medicines. The most common diseases are HIV/AIDS, tuberculosis, malaria, dysentery and parasitosis.